A brief story about a drug addict that destroyed his life 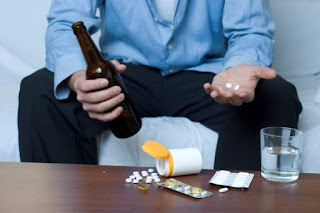 The story of a penitent drug addict

Dion, a heroin addict who began to recover from a not-so-long time under the influence of addiction, described his addiction as something like an amazing rush, a rush that puts him on top of the world .

He also described his feeling that he was separating his mind from the world and giving him an imaginary sense of excessive happiness, not knowing whether he was asleep or awake, and with time he became addicted to drugs and continued his story saying : after passing a period I needed drugs to help me live I felt pain in all my body and

You feel like death surrounds me and I feel better even heroin abuse, once caught the police because I bought heroin, I spent in jail short duration and then came out and promised once again to drugs..

I was arrested again and put on a drug treatment program, and I did not respond to treatment because I had no desire to stop using, and after I got out of prison I made a decision to control the way I used drugs .

Addiction makes you want more and more and pushes you to do things you don’t expect just to feel that delusional happiness again .

And that feeling of euphoria and one day I overdosed on drugs and went to the hospital, and that was the first time I felt scared that those drugs would be the cause of my death .

Then the social worker at the hospital took me to a house where other men who were on a treatment program were also recovering from addiction like me, and we were attending meetings and fellowship classes to help us rebuild our lives once without drugs .

The story of a drug-addicted girl

In 2017, Christine tells the story of a drug-addicted girl who started taking drugs in high school when she was shot in the back and lost her chance to get a scholarship .

The pain of the injury, I relied on painkillers in a permanent way, and over time the pain was increasing and I had to take larger amounts of painkillers to cope with the pain and it had no effect .

Then I had another type of painkillers, but it was expensive, and from then on I got to know heroin, it was cheap and easy to get, and I found myself taking it several times to reach higher levels of comfort .

I’ve lost control of my life since I started using heroin, I’m addicted and I can’t control myself .

The more my life spiraled out of control, the more desperate I felt that I could never regain my former life or even my sanity .

I felt that I would never have a chance to change my life and I could not see the whole truth until after I had admitted defeat and handed my life to God .

On 25 October 2017 can participate in the program for the drug I’m relapsing chronic, and has undergone before treatment 4 times without success to stop the addiction until I received residential treatment .

The story of a young drug addict brief

William ” will ” Christine dorhoff William had a strong and positive presence in his community, William was 6 feet tall, studying first class at the prestigious Little Rock Catholic school

During William’s first year at University in 2014, he joined some friends who claimed to be brothers, and one of his older colleagues introduced him to the use of narcotic drugs from pills, injections and smoking .

By the end of the year, William had become addicted, and after his addiction to drugs and heroin, he had overdosed on drugs and was hospitalized after months of treatment .

But the more you know William setback and disappeared after taken an overdose of drugs and after his death they found text messages on his phone that he was famous among his friends take drugs .

After his mother learned about his addiction and the cause of his death, he decided to establish a foundation named after William to spread awareness about youth drug use in high school and University .

Adam, a popular adventure-loving young man, sportsman and Hunter, fluent in French and a well-known university graduate, died at the age of 27 from a drug overdose .

His father said that Adam was a smart young man who graduated from Exeter High School, played football with the school team and graduated from Temple University .

Adam’s father has also stated that Adam was a tuna fishing skill and he had scored a place in the reality show on national geographic on wicked Tuna, Adam has also appeared in the second season of the popular cable show

It was famous for the competition between two teams of commercial fishermen competing to catch the largest number of tuna in the Atlantic Ocean .

His father also said that intelligence does not make sense in what happened to his son it is all due to his ignorance using wrong ways to overcome the noise of life drugs are to manipulate the minds of young people, and in his eulogy Adam’s father highlighted all that Adam has achieved in his life, and also gave a warning.