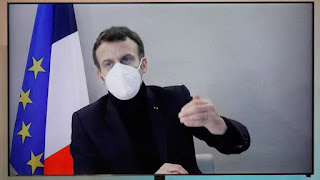 In his first appearance after confirming his infection with the Coronavirus, French President Emmanuel Macron confirmed in a speech on Twitter on Friday that he is in good health. Macron considered that “there is no reason for things to develop in a bad way,” stressing that he would continue managing state affairs, albeit at a slower pace.

Macron said he still suffers from the same symptoms of “fatigue, headache and a dry cough”, and called on the French to “remain vigilant.”

He added: “I am very careful. I respect the prevention and distance measures, wear the muzzle and use the sterilizer regularly. Despite this, I got infected with the virus, perhaps because of a moment of neglect … But this is what happened.” .

Macron also warned that the virus is “getting stronger”, recalling that 18,000 new infections were recorded on Thursday.

He continued: “Yesterday, I found out that I had an epidemic, which shows that the virus can really affect everyone, because I was very protected.”

“I met many political officials, including members of the government and international leaders, as well as members of the nearby security team, close people and family members,” he stressed.

Macron left the presidential palace to his residence at La Lanterne in Versailles, near Paris, where he confirmed that he was “isolating himself to continue working.”

And the Elysee Palace confirmed, in a statement issued Thursday, that Macron was infected with the Corona virus. The statement added that Macron will be subject to “isolation for seven days” and will continue his activities from a distance. Accordingly, Macron will cancel all his planned foreign activities, including his visit to Lebanon.

And the French presidency indicated that Macron and his team are trying to find out where and how he was infected with the virus.

In addition, the French Prime Minister, as well as the leaders of political parties in the National Assembly, will be subject to self-quarantine, after their contact with the President.