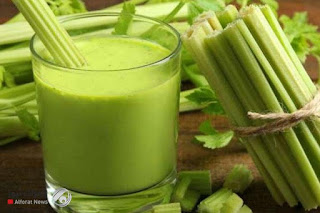 Many nutritionists advise to drink mixed and filtered celery juice every morning on an empty stomach, as it is said to have many positive benefits for the body.

This has led to many of the testimonies of celebrities promoting the drink, to the spread of hype about this useful natural juice, through social media recently.

The health benefits you may get from celery juice:

Celery contains special nutrients in its fibers, which are activated when the juice is made from it, as these nutrients act as a natural laxative, and they also relax damaged nerves due to an unhealthy lifestyle and eating unhealthy processed foods.

Celery juice works as a sedative and coolant for the digestive system, as well as an anti-inflammatory, in addition to being an amazing treatment for those suffering from intestinal problems and irritable bowel syndrome, because it contains a very high percentage of natural sodium, which can help you absorb the rest The food you eat throughout the day.

It strengthens the bones:

Celery contains a very high percentage of calcium and silicon, which contribute to the regeneration and strengthening of damaged bones, and it is rich in vitamin K, which plays an important role in maintaining bone health and combating osteoporosis.

Celery contains a specific compound called coumarin, which boosts the activity of white blood cells, and helps maintain the health of the vascular system, which enhances blood flow, reduces blood pressure, and purifies the bloodstream.

It is worth noting that many diseases of the nervous and blood system are due to the accumulation of inorganic elements and salts that a person consumes in the body in the form of processed products, and the sodium present in celery can maintain blood flow as well.

Get rid of toxins:

Celery juice is a very alkaline moisturizer, which makes it great for balancing the body’s pH, neutralizing acid, and this property can also provide protection for healthy cells and reduce the risk of a range of serious conditions including heart disease, and maintain Bone density, reduce inflammation and boost the immune system.

It should be noted that drinking celery juice alone, compared to mixing it with other ingredients, facilitates digestion and elimination of waste products, which helps the body to cleanse itself, get rid of toxins and restore its health.

Which has been shown to stop the effects of some enzymes that activate the genes responsible for the inflammatory response, as for luteolin, it is a powerful antioxidant that helps fight the damage that forms free radicals, which cause inflammation and cancer, as it reduces oxidative DNA damage associated with inflammation.