How to make a cold coconut cake 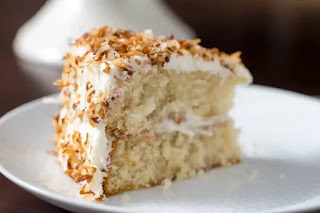 Coconut: half a cup (chips)

Baking powder: A teaspoon and a half

Salt: half a teaspoon

Mix the flour, baking powder and salt together in a bowl, and set aside.

Put the butter and sugar in the bowl of the mixer, and run the mesh beater on medium speed until a crispy light yellow mixture forms.

Add an egg to the butter mixture, turn the paddle on until it disappears, then add the remaining eggs with vanilla.

Add the flour and coconut milk, and mix for a minute until the mixture is mixed, then spread the mixture in two oven molds after brushing them with ghee, and sprinkle them with flour.

Insert the cake pan into a preheated oven at 180 ° C for a period of thirty-five minutes, then take the cake out of the oven on a metal mesh and leave it for four minutes.

Take the cake out of the tray, and put it on a metal mesh until it cools completely, then insert the second cake in the same way.

To prepare the filling: Put the sugar, cream, milk and coconut in a deep bowl, and stir them with a hand-held net beater until you get a homogeneous mixture with a creamy consistency.

Put a layer of cake in a serving bowl, then spread the filling, then put the second layer.

To prepare the topping: Put the cream in the bowl of the mixer, and run the mesh beater on medium speed until the cream becomes crisp, then add the sugar and vanilla and blend them for a few seconds.

Spread the cream on the top and sides of the cake, then spread the coconut, and put it in the refrigerator for several hours before serving.