An American surprise … the “Pfizer” vaccine against Corona kills 6 people 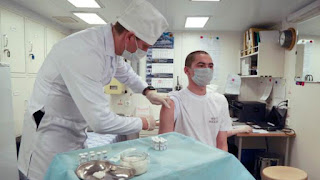 The American “Politico” website, citing the “US Food and Drug Administration”, announced that 6 people have died during trials of the Corona virus vaccine developed by the American pharmaceutical company “Pfizer” and the German company “Bio-N Tech”.

The “administration” said in a report that “one of the participants in the vaccine tests developed obesity and hardening of the arteries and died three days after taking the first dose of the drug.”

The report added, “The deceased second volunteer had a heart attack 60 days after the second dose of the vaccine.”

He continued: “Two of the participants who received the vaccine died as a result of a heart attack and stroke, while the cause of death of two other people is being determined,” explaining that among the six dead, three were over the age of 55.

And about 38 thousand people “over the age of 16 years” participated in the tests of the American vaccine, “Pfizer and Biontech”.

Earlier, the US Food and Drug Administration confirmed the effectiveness of the Pfizer and Biontech vaccine, and the documents said that the drug showed an adequate level of safety, and there are no obstacles to its use in emergency situations.

What are the scientists afraid?

Despite the talk that the “Pfizer” vaccine is the best, researchers are afraid of the effectiveness of this vaccine in the long term, since the technology that the manufacturer has relied on remains new, and its long-term effectiveness can only be known after the experiment, in addition to that. The question that arises is about how long the human body will fight the virus.

The researchers believe that “the amount given to a person plays a fundamental role in the effectiveness of the vaccine, as the large amount negatively affects the human immune system and its effectiveness in fighting the virus.”

In addition to all of the above, the “Pfizer” vaccine is stored at 70 degrees below zero for a period of fifteen days. The lesson here is the need to adhere to the procedures for transportation and storage around the world, especially for developing countries that want to obtain the vaccine.