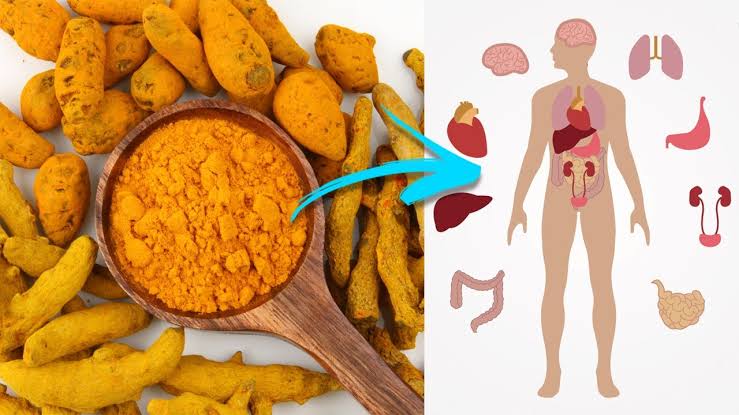 Turmeric has become one of the most famous spices in the world thanks to what many studies have shown about its benefits and positive effects on human health. Get to know the most important ones.

Some called it the miracle cure when it was circulated about its positive repercussions on human health. It has proven that its benefits are multiple because it contains antioxidants and anti-inflammatory. What are the effects of eating turmeric on the human body and health?

Of course, spices alone do not lead to the loss of extra kilos. But when you make it a component of a healthy diet, turmeric helps your body stimulate fat burning.

A study published in the “Journal of Medicinal Food” showed that turmeric has the ability to reduce pain, swelling, and stiffness in the joints. That’s why the Arthritis Foundation recommends patients take one capsule of turmeric twice a day.

According to the Health Journal, the results of ten different studies revealed that turmeric can reduce symptoms of anxiety and depression, because they are often accompanied by inflammation, and the anti-inflammatory spice can improve the resulting negative psychological conditions.

Scientists are studying the real reasons why Indians, whose dishes are rich in turmeric, are less likely to develop Alzheimer’s disease. This is compared to the population of Europe and the United States of America. Research results on the topic are not yet out, but there is agreement among scientists that daily consumption of turmeric can be beneficial for memory and cognitive function.

A report published in the journal Nutrients confirmed that turmeric contains ingredients that help reduce cancer risks, and the report stated that additional studies are being conducted on the topic.

Irritable Bowel Syndrome greatly affects the daily lives of people with it. Turmeric is considered a spice that helps relieve the resulting pain.

Preliminary studies on the subject highlighted that turmeric can lower blood lipids. If tests were conducted on people with it who underwent a diet containing turmeric regularly, their blood cholesterol level decreased.

Reduces the risk of heart disease

If a person is deficient in iron, turmeric limits its absorption, by 20 to 90 percent. Therefore, it is advised not to eat it in excessive quantities, in addition to several other spices such as chili, garlic, and shallots.

It is scientifically proven that turmeric has a similar effect to blood-thinning drugs, which increases the risk of bleeding.

It lowers blood sugar too much