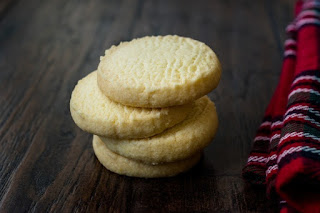 Powdered sugar: half a cup

In a deep bowl, put the butter, sugar, vanilla and an egg. Using a hand or electric beater, whisk until it becomes crisp and light in color.

Add the flour and baking powder and continue to beat until the dough becomes homogeneous, and then collect the dough between your hands, and form it like a cylinder, then put it in the refrigerator for two hours.

Install the mesh shelf in the center of the oven, preheat the oven to a temperature of 180 degrees, then bring 2 short edge trays, and put parchment paper inside the trays.

Using a knife, cut the biscuit dough into thin slices, then put it in the tray, leaving a space between each piece and the other, and put it in the oven for 10 minutes.

After leaving the oven, leave it to cool down in the trays, then serve it plain or decorate it as desired, and it is served with tea or tea with milk as well.