Pasta with cheese and chicken 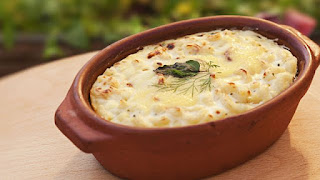 Ingredients for preparing the cooking cream:

Liquid milk – 3 and a half cups

The method of work

1- In a pot of boiling water over a medium heat, boil the pasta according to the instructions on its box, then put it in a colander.

2- To boil the chicken: in a saucepan over a medium heat, place the chicken pieces and immerse them in water.

3- When the mixture boils, remove the exhale, then add the onion, bay leaf and cinnamon.

4- Leave the saucepan on a medium heat until the chicken is tender.

5- Take the chicken out of the pot and cut it into medium-sized pieces, then set aside.

6- To prepare the cooking cream: In another saucepan over medium heat, melt the butter, then add the flour and stir until the ingredients overlap.

7- Pour the milk gradually, with constant stirring, until you get rid of the lumps, then season with salt and black pepper.

8- Leave the cooking cream on medium heat with constant stirring, until it boils and thickens.

9- Place the pasta in an oven tray, then add the chicken pieces and the cream and stir gently.