Natural recipes for getting rid of facial blisters 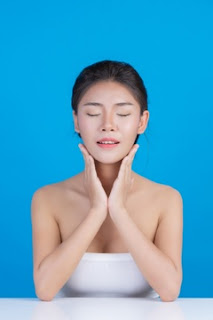 The face is known as the place that tops the front of the head in Man and many other living organisms, and the face contains many sensory organs such as the mouth, nose, eyes and ears, and the face is called this name because the person faces it with what is going on around him, and the face is an important organ to identify

Pimples are known as spots that appear on the face, and these spots are a type of acne, and these grains appear as a result of increased sebaceous secretions in the pores, and pimples are a widespread skin disease, and have many names and forms, such as hard pimples that appear on the surface of the skin and remain under the skin, and to the appearance of pimples, they may appear Large in the face and take the form of spherical grains with dark or white heads, and may also be present in several areas such as the upper back, chest and shoulders.

There are many reasons that lead to the appearance of pimples, including the following:

Think clogged pores and sebaceous glands which inhibit the secretion of fatty substances responsible for skin hydration, which in turn caused the accumulation of oil, dead skin cells and bacteria, and when they interact with each other to increase the appearance of pimples.

This reason means genetic genes as they play a big role in determining how sensitive the skin is to hormonal changes in the body, how quickly the skin cells regenerate, how much oil the skin produces, and how it responds to inflammation, and thus increase the percentage of pimples, as these genetic factors increase in some people whose parents have a history of acne.

Hormones are one of the causes that play a major role in the appearance of acne and other pimples, so that when the level of androgenic hormones in both sexes rises in puberty, it may cause the sebaceous glands to swell and increase their secretion of oils, thus increasing the accumulation of these oils and their interaction with bacteria increase the chances of

Many studies indicate that the psychological state, such as anxiety and stress, leads to the emergence of many problems and negative effects on the body and skin, as the bad psychological state caused by stress increases the appearance of acne further, due to the presence of receptors for stress hormones in the sebaceous glands, which increases the secretion of oils in the

It is worth noting that smoking reduces the flow of oxygen to skin cells, causing a hormonal imbalance, and slows the healing of wounds and inflamed skin cells.

As many studies have proven that eating some food which contain skim milk, and food rich in carbohydrates such as bread and potato chips and chocolate caused in the network, and increase the spread, because these foods contain many of the oils and fats increased by large, and thus stimulate the proliferation of pimples on the face.

They are intended for drugs that include corticosteroids, testosterone and lithium, and taking drugs that contain these substances causes acne to develop rapidly.

Excessive use of skin products

As it leads to the continuous and excessive use of cosmetic products such as make-up and others, one of the most common reasons for the appearance of various grains and pimples, as some of these products may increase the secretion of oils in the pores, and close them, so blisters with white heads arise on the face

There are many natural recipes to remove facial blisters, among which are the following:

We wash the potato fruit well.

Put the pieces of potatoes in the food processor.

Mix the potato pieces well in the food processor until they produce juice.

Wash the face with lukewarm water and drain well.

Put potato juice on the face and leave for ten minutes to dry.

Wash the face with lukewarm water.

Repeat this recipe for two weeks to get amazing results.

A tablespoon of finely chopped cucumber.

Put the cucumbers in a medium bowl.

Add two tablespoons of yogurt to the cucumber.

Underestimate the ingredients together well.

Put the mixture on the face and lose him completely.

Leave the mixture on the face for fifteen minutes.

Wash the face with cold water and drain well.

Repeat this process daily to remove the warts.

A teaspoon of English salt.

Half a glass of water.

We put water in a medium-sized bowl.

Add salt to the bowl of water.

Underestimate the ingredients together until the Salt begins to Melt.

Wash the face with lukewarm water well to get rid of traces of salt.

Repeat this recipe twice a day to get quick results.

Half a glass of water.

We put water in a medium bowl.

Add vinegar to the bowl of water.

Stir together until the vinegar and Water Blend.

Dip a cotton swab into a vinegar Bowl.

Wipe the face with cotton dipped in vinegar and water mixture.

Leave the mixture on the face for seven minutes.

Wash the face with cold water.