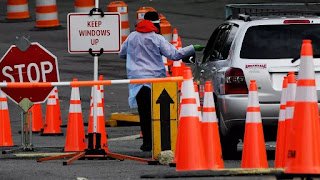 On Wednesday, the United States recorded the death of more than 3,700 people and infected more than 250 thousand others with the emerging coronavirus within 24 hours, in a daily toll of infections and deaths being the highest in this country, according to data published by Johns Hopkins University.

It is the third time this week that the daily death toll from Covid-19 in the United States has crossed the 3,000 deaths.

And for two weeks, the number of new daily cases of the epidemic has not stopped breaking records in the United States, and the number of Covid-19 patients who are admitted to hospitals continues to rise. There are currently more than 113,000 patients with Covid-19 in hospitals, according to data constantly updated by the US Department of Health.

And the health authorities were expecting this increase after the travels made by millions of Americans two weeks ago to celebrate Thanksgiving, despite the calls that were directed to them to stay home.

And if the epidemiological situation is improving in the Midwest, where the number of new daily infections and the number of hospital cases is declining, then the epidemic is spreading at an accelerated rate in the west and northeast of the country, according to the “Covid Tracking Project”, which tracks data daily across the country.

More than 16.9 million people have been infected with the emerging coronavirus in the United States since the start of the outbreak. However, the actual outcome may be greater due to the lack of widespread testing in the first stage.

On Monday, the United States began a large-scale vaccination campaign, aiming in the first stage to vaccinate 20 million people this December.

This campaign, which will be the largest of its kind in the history of the United States, aims in its first phase to immunize health care providers, who are most at risk of contracting the virus, which number about 21 million people, and inmates of nursing homes, who number about three million people.

The campaign aims to vaccinate a hundred million people by spring and all of the US population by summer, but matters will depend a lot on Americans ’confidence in the vaccine.

According to epidemiologists, it is necessary to vaccinate more than 70 percent of people to stop the spread of the epidemic.

On Wednesday, the White House announced that Vice President Mike Pence and his wife Karen “will receive the anti-Covid-19 vaccine in public Friday to enhance Americans’ confidence in the vaccine and to confirm its safety and efficacy.”