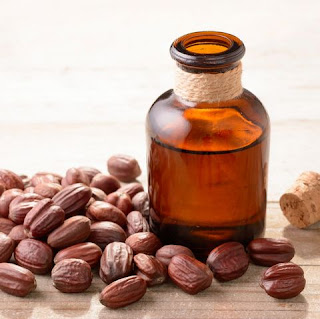 There are many benefits of jojoba oil for the skin make you keen to use jojoba oil recipes for the skin that people have used jojoba oil over many years because of its wonderful benefits for Health, Skin and hair. Jojoba oil is a waxy Ester ” liquid wax ” very similar to the natural oils secreted by the skin ” sebum ” it is not as some believe it is an oil, but rather a liquid vegetable wax. Jojoba oil can be obtained from the seeds of a jojoba plant or shrub. It is a plant native to Southern California in the United States and parts of northern Mexico.

Jojoba oil is known for its moisturizing and antibacterial properties, which help to get a smooth, moist and wonderful skin. In addition to its wonderful moisturizing benefits, jojoba oil offers many other benefits and this makes it an essential ingredient in many cosmetics, including:

It resembles natural sebum which makes it moisturize the skin without causing grease build-up.

Contains a high percentage of vitamins and minerals that support skin health such as vitamin ” B, E, zinc, copper, selenium, chromium and iodine”.

Safe to use topical for most people ( including children and infants).

Benefits and uses of jojoba oil recipes for skin

Jojoba oil works as a great moisturizer for the skin, and the body absorbs it with ease. Because it resembles natural sebum and helps regulate oil production, it is great for oily, dry and even normal skin.

What are the benefits of jojoba oil for hair

And can use jojoba oil alone on the dry areas existing on your skin, and can be used to get rid of wrinkles and stretch marks.

2. used as a makeup remover

Jojoba oil is very close to the natural sebum of the body, so it does not clog pores and works use great makeup without drying the skin. Just apply a few drops of jojoba oil to a cotton ball and knead with it to remove makeup.

3 – continue to the oils in the skin

Jojoba oil works very well even on oily skin. This oil works in two ways, capturing oils and removing them from the skin, and it also moisturizes the skin, helping to reduce the production of natural sebum. When the skin dries due to excessive washing, the sebaceous glands produce more sebum. But the use of jojoba oil on the skin helps to reduce this sebum and regulate its secretion, reducing oils and balancing skin oils.

4 – a moisturizer for the lips

Jojoba oil can be used to get rid of sunburn, as it is a wax, not an oil, which forms a protective layer on the skin to protect against the sun and help heal sunburn in case of injury. Jojoba oil also contains vitamin E, which can help heal and protect skin burns. It also helps to reduce the report.

Jojoba oil effectively treats fungi and prevents impurities and fungal infections that affect the feet such as athlete’s foot injury, foot fungus. Use a few drops of jojoba oil on the foot 2-3 times daily.

Jojoba oil can help with acne, as it does not clog pores and helps remove excess oil and dirt and cleans acne-affected skin. It also helps in the treatment of scars caused by acne and helps to accelerate the cell renewal process.

Jojoba oil recipes for the skin

Jojoba oil recipes for the skin

Jojoba oil can help you get rid of dry skin or wrinkles. You can add jojoba oil to the coconut oil or evening primrose oil get rid of wrinkles and dryness around the eye area.

4-jojoba oil recipe as a face and Body Lotion

Jojoba oil with shea butter and sugar can be used to make a natural skin scrub to solve dry skin problems especially in winter. This recipe helps exfoliate the skin and eliminate dryness and make the skin look softer.