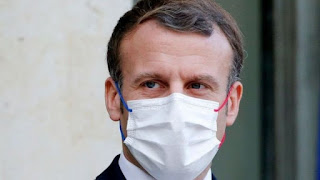 Today, Thursday, the Elysee Palace announced that French President Emmanuel Macron had been infected with the Corona virus.

According to the rules followed in France, “Macron is now subject to a personal isolation for a period of seven days. He will follow up on his work and activities remotely,” according to the statement.

The statement added: “Today, the tests showed positive for the president’s analysis of Covid-19 … Macron was examined as soon as the first symptoms of infection appeared on him.”

And France earlier this week relaxed its restrictions imposed to confront the second wave of the Corona virus, despite the continuing high infection rates in the country.

The curfew is still in place throughout France, starting at eight in the evening, in an attempt to limit the spread of the virus, and the decision to close restaurants, cafes, theaters, and cinemas is also in effect throughout the country.

More than 59,300 people have died in France as a result of COVID-19 infection since the start of the epidemic, according to official figures.

Yesterday, Wednesday, only 17,000 new infections were recorded by the health authorities in France, which increased fears, as people became accustomed to intensifying purchases and travel ahead of the Christmas celebration.

Like the rest of the European Union, France is pinning its hopes on developing a vaccine to prevent infection with the virus.

On Wednesday, French Prime Minister Jean Castex said that his country will receive 1.16 million doses of the Covid-19 vaccine by the end of the year.

Castex will also go into self-isolation, due to his contact with Macron.

It was also decided to cancel Macron’s imminent trips, including a visit to Lebanon that he was planning to make next week.

The source of Macron’s infection with Covid-19 is not known yet.

France recently ended a nationwide lockdown that lasted six weeks, and instead imposed a night curfew.

The infection rates are still above the national target at 5,000 cases per day.

The French president is one of many heads of state and government around the world who have contracted Covid-19, including British Prime Minister Boris Johnson and US President Donald Trump.