Corona and another good news … One vaccine dose is enough? 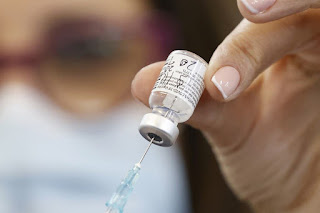 The production of vaccines against the#coronavirus has brought more positive news than just starting to gradually protect humanity from the pandemic. It produced at record speeds compared to previous vaccines, and its effectiveness was greater than the most optimistic forecasts.

Harvard epidemiologist Dr. Michael Mena and social science writer Dr. Zainab tofakji reported in the New York Times another positive news, although it still needs to be studied and scrutinized as they explained. Citing the food and Drug Administration, it noted that a single dose of the#Pfizer and#Moderna vaccines may be enough to secure high levels of immunity.

The two vaccines are supposed to be given in two doses: the first is basic and the second is reinforced. 21-28 days between the two doses of the Pfizer vaccine. If true, this reality would allow about twice as many people to be vaccinated in a given period of time. But in order to test this possibility, the world moving quickly to get additional data.

With both vaccines, the authors continued, the decrease in the severity of the disease in vaccinated people began about 10 to 14 days after receiving the first dose. Moderna reported that the basic dose was 92.1% effective two weeks after receiving the first dose. The data suggests inoculation via a single dose. But the data itself is also limited. Approval for single-dose administration requires higher standards and more tests.

Scientifically, Mina and tovcji continued, scientists are aware that infection with the virus seems to give the patient immunity between 5 to 7 months. Injuries are not a vaccine, scientists need more data on the subject. But there is a possibility that the vaccine’s immunity may be stronger than infection.

The goal of the second dose is to enhance immune memory by giving additional training to cells to produce antibodies. But this path begins with a single dose. Evidence collected during the intermediate period of the two doses in tens of thousands of people in the Phase III tests suggests that the level of immune memory may provide adequate protection to match the criteria for vaccine approval even before the second dose.

While scientists understand that a single dose can protect vaccine recipients from disease, it is not clear how long or at what level this protection will be. However, no rule says that vaccines should be strengthened within weeks. With measles, the difference between the two doses is years. If the enhanced dose can be administered after six months, it will be possible to vaccinate twice as many people between today and late next year.

In the experiences of both companies, withdrew a number of people before receiving the second dose. Can follow these people to see what happened with them. The absence of infection among these groups is not enough to give the green light that scientists want, but the increase in cases of infection will provide reason for caution.

The authors suggested starting with a single dose for volunteers from low-risk people who are at the forefront of vaccine applicants. As tens of thousands of people have volunteered for initial trials, many will also apply for a second dose placebo. This allows experts to quickly verify the efficacy and sustainability of a single dose. There are scientific reasons to believe that a violation of these experiments is low. In addition to the dose clearly securing some immunity, later exposure of healthy people to the virus means that it is natural infection that will act as an immunosuppressant.

Even if scientists find that one dose is less effective than the two doses, it must be remembered that not so long ago the world would have been excited if it had heard of the production of a vaccine that is less effective than the single doses of the two vaccines today. If the world begins to grope for the effectiveness of a single dose and if the data include it, scientists can accelerate the path. The prospects of adding hundreds of millions to vaccine recipient regulations in 2021 should not be ignored.