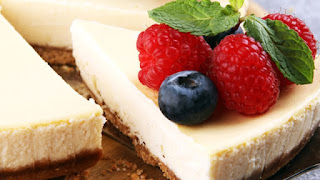 Crushed biscuit – one and a half cups

Lemon juice – half a teaspoon

The method of work

1- To prepare the first layer: In a food processor, put the butter and honey biscuits. Grind the mixture well until it is homogeneous, then stack it on a moving base oven tray.

2- To prepare the second layer: In an electric mixer, put cream cheese, whipping cream, powdered sugar, lemon juice and vanilla. Mix the mixture until it is homogeneous.

3- Spread the pellet mixture over the biscuit layer. Put the tray into the refrigerator until frozen desserts.

4- Take the tray out of the oven and loosen the sides carefully. Garnish with red and blue berries, chop and serve. Thousand health!