Chamomile .. Antibiotic, natural sterilizer and pharmacy for the treatment of diseases of the respiratory and digestive systems 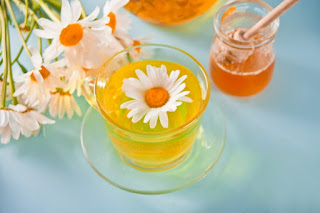 Chamomile is one of the most famous medicinal plants used by perfumers and herbalists to treat many diseases, especially diseases of the respiratory and digestive systems, because of its benefits because it contains a number of medicinal properties used recently in the preparation of medicinal prescriptions.

Chamomile flowers contain volatile azulene oil, which amounts to 1.5 percent of dry flowers, and the oil is extracted using the steam distillation method, which is a heavy viscous liquid that freezes by cooling and has the well-known smell of chamomile. This compound is characterized by its blue color, which is the main effective and effective substance in chamomile and that the properties of Azulin are like olive oil. Because it contains many unsaturated fatty acids, the chemical affinity is quick to incorporate with other materials, making it a basic component in the composition of many therapeutic materials.

Chamomile is also used as a nasal wash in case of congestion and the presence of an unpleasant smell in it, as it purifies the nostrils and facilitates the process of breathing and resists colds by adding a large spoon to each cup of water and inhalation is done several times and the process is repeated in the case of severe congestion three times a day and boiled chamomile uses mouthwash and gargle to relieve The smell resulting from some cases of sore throat or gums, which soothes the feeling of pain and sterilizes the mouth. Chamomile has unique properties that make it a general sedative for both the body and the soul, and it is useful in cases of insomnia, depression and psychological crises in general, pointing out that chamomile works the same as antibiotics in quickly curing nasal and respiratory infections and eliminates the existing germs within a short period.

Chamomile is used for cases of stomach cramps and parts of the digestive system, colic in the stomach, intestines and gallbladder, where the water is heated and a little chamomile is thrown in it, then covered with a large piece of cloth and the patient begins to inhale chamomile steam for at least a quarter of an hour, so chamomile works to kill germs and treat infections. Chamomile flower powder is used to treat skin infections, sores and wounds in the mouth, and flower emulsions are used to wash eyes afflicted with conjunctivitis, as chamomile boils are useful for cases of disorders

Digestive and heat reduction, indicating that chamomile is used in first aid in the case of diarrhea or stomach and intestinal cramps, and it helps to expel the gases generated in the intestine and calm the nerves. It is advised not to take too much chamomile decoction because some people feel headaches and heavy head, and sometimes lead to dizziness, nervousness, moodiness and insomnia, and it is not recommended to use it for people who suffer from sensitivity in the eyes except after consulting a doctor because it may cause side effects, especially when it interferes with some chemical drug combinations. .

Chamomile has many uses in the fields of cosmetics and skin freshness, where the azulene and gels contained in flowers affect by 10 percent the effectiveness of the herbal mixtures that are described to give the skin a natural color and restore vitality to it. Also, using boiled chamomile to wash hair gives it strength and vitality.