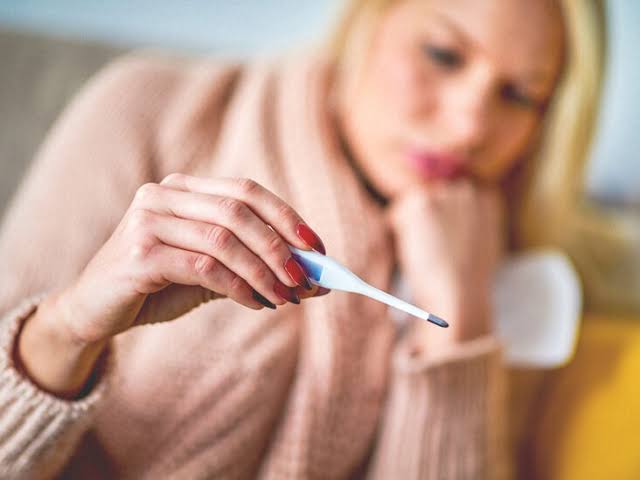 A woman’s body temperature may often rise above the normal range. In this article, learn about the most important of these causes and the easiest ways to avoid them.

The average human settling temperature is approximately 37 degrees Celsius, and any increase or decrease in temperature above the normal range does not necessarily mean that there is a health symptom.

The temperature of a person can vary according to several factors, such as age, gender, time of day, or during various activities.

PMS
A woman may feel a high temperature during her period and even when she is due. The imbalanceance of hormone levels in a woman during her period may cause a feeling of high heat in the body, especially upon waking from sleep.

During this time, the level of the hormones progesterone and estrogen decreases, which causes an incorrect response to the pituitary gland, which is responsible for regulating human temperature, so the woman feels a rise in temperature and sweats in the body.

ovulation
Ovulation occurs once per month so that one or more eggs are produced that are ready for fertilization to prepare for conception. Ovulation occurs on the fifteenth day of the menstrual cycle and lasts only 12-24 hours.

A woman’s body temperature rises during the period of ovulation and remains elevated until the next menstrual period, which is about two weeks, and for a longer time if pregnancy occurs during that period.

pregnancy
Pregnant women often have a raised body temperature, which can be most noticeable in the first trimester of pregnancy.

Pregnant women are advised to take caution and work not to neglect the temperature rise significantly, which is harmful to the health of the fetus, especially in the first month of pregnancy.

It should be taken into account that a pregnant woman should not be exposed to sauna steam and heating, especially in the winter season, which may raise the temperature excessively.

The level of estrogen hormone is lowest as a woman gets older, which causes the body temperature to rise. Hot flashes last from 30 seconds to several minutes at a time.

Fever and a high temperature due to a viral or bacterial illness.
Eat and drink before taking the temperature.
A defect in the thyroid gland.
Simple ways to lower body temperature
Drink plenty of water: at least 8 glasses a day: water gives a cool and refreshing feeling, and water reduces constipation and fluid retention.
Swimming: Swimming provides the body with coolness and activity, as well as relieves anxiety and tension.
Participate in relaxation classes: Relaxation and yoga classes reduce body temperature and relieve stress.
Avoid direct exposure to the sun: The sun increases the body temperature further, especially in the summer.
Organizing the dates of different activities in the early morning or evening times: It is preferable to leave the house at the least hot times of the day, and it is preferable to use an umbrella at other times.
Showering with cold water: Taking a shower with cold water effectively lowers the body temperature.
Carrying a fan for ventilation: It is possible to use a fan for ventilation, and a spray of cold water can be used to be sprayed on the skin from time to time.
Keep the heart rate below 140 beats per minute: It is very useful to exercise half an hour a day, but it is preferable to choose less intense exercises so that the heart rate does not increase excessively.