Brazil: about a thousand deaths and more than 42 thousand new cases of Corona 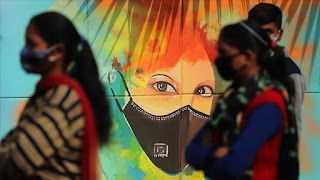 The Brazilian Ministry of Health announced that about 43,000 confirmed cases of the emerging coronavirus (Covid-19) had been recorded during the past 24 hours, in addition to about a thousand deaths resulting from infection.

This came, according to a statement issued by the Brazilian Ministry, on Tuesday, which confirmed that the country recorded 42 thousand and 889 injuries within 24 hours, 964 deaths.

With these numbers, Brazil ranks third in the world in terms of injuries after the United States and India, with 6 million and 970 thousand and 34 injuries, and second in terms of deaths after America, with 182,977 cases recorded.

As of Wednesday dawn, the number of Corona patients in the world exceeded 73 million and 750 thousand, of whom more than 1 million and 639 thousand died, and more than 51 million and 771 thousand recovered, according to the “World Meter” website.