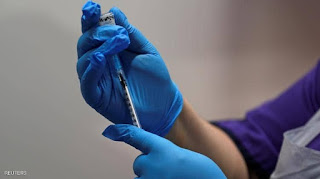 On the second day of Britain’s campaign to vaccinate the population with a vaccine against the emerging corona virus, the health authorities issued a new recommendation regarding the product of “Pfizer” and “Biontech”, after the emergence of minor side effects.

The Medicines and Health Care Products Regulatory Agency recommended that people with a “clear history” of allergic reactions not receive the new Corona virus vaccine for the American and German companies.

The British health authorities are investigating two negative side effects that occurred on the first day of the country’s comprehensive vaccination program, which began Tuesday.

The medical director of the National Health Service in England, Stephen Boyce, said that health authorities are operating on the recommendation of the Medicines and Healthcare Products Regulatory Agency, the country’s drug regulator.

Boyce said: “As is common with new vaccines, the agency has recommended that people with a long history of allergic reactions not receive this vaccination, preventively, after symptoms appear on two patients, but both are on the way to recovery.”

And a British health official announced earlier on Wednesday, the first side effects of the promising vaccine.

John Ryan, chief executive of the Independent Medicines and Healthcare Products Regulatory Agency in Britain, said: “Yesterday evening (Tuesday) we had two cases of an allergic reaction. We know from very extensive clinical trials that this is not a feature (of the vaccine).”

And clinical trials had proven the effectiveness of the vaccine by more than 90 percent, knowing that the body begins to form immunity against the Corona virus days after receiving its first dose.