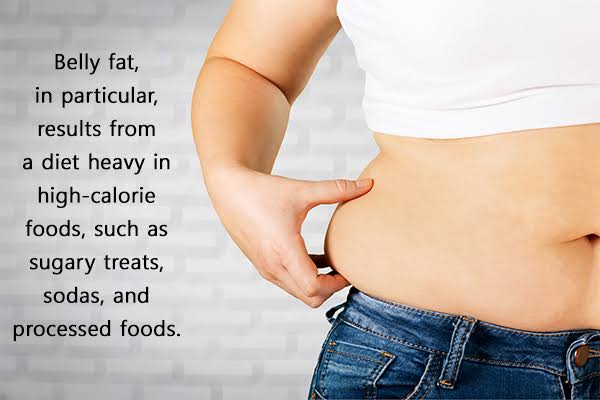 Accumulation of fat in the abdominal area

A problem that many people agree on, and find it difficult to eliminate, is belly fat, as fat usually accumulates in this area more than others.

This is due to some of the reasons that result in this fatty accumulation in the abdomen, which we will talk about in detail, in addition to the best ways to get rid of this accumulated fat.

There are 5 main reasons behind the accumulation of fat in the abdominal area, what are they? And how can it be overcome?

It means the presence of one or more people in the family history who suffers from belly fat, and this health problem is transmitted from parents to children.
If the cause is genetic, getting rid of these fats requires time and effort. A healthy diet must be followed and continued until the belly fat is eliminated.
In conjunction with the diet, you must do abdominal exercises daily, and not follow the wrong health habits that make the task difficult.

A major factor in the accumulation of fat in the abdominal area is lack of movement.
Even with a harsh diet, you will not be able to eliminate fat in some areas of the body such as the abdomen, so you need to exercise.
Jogging is one of the most prominent sports that contribute to burning belly fat, as well as aerobic exercises, as well as abdominal exercises that focus on the fats of this area in particular, so care must be taken to practice them regularly.

Not eating regularly and healthy

The more unhealthy foods you eat, the greater the chances of fat accumulating in certain areas of the body, most notably the abdomen, as unhealthy fats found in fryers, for example, increase the chances of fat accumulation in the abdominal area.
As for “monounsaturated” fats, which are found in some foods such as avocados and salmon, the body gets rid of them faster than others.
There is another belief that by refraining from eating food contributes to burning fat, but this is a big mistake, as burning fat requires the presence of food that increases the rate of burning, while abstaining from food causes the body to reduce the percentage of burning in it because it does not find anything to burn.
Therefore, three main meals should be eaten, with snacks consisting of fruits and vegetables between them, provided that breakfast should not be later than 10 am, to help activate and regulate the burning, and dinner should not be late for 8 pm.

Many of us adopt wrong eating habits without realizing how dangerous they are, because their side effects do not appear immediately, weight increases gradually and a person may develop some diseases, and among the most dangerous of these habits are:
Eating fast food: it contains a large amount of harmful fat on the body, which is difficult for the body to burn or get rid of, so it turns into accumulated fat and is distributed in various areas such as the abdomen, thighs and arms.

Eating food directly before bed: or in the late hours of the night, this is one of the most common causes of the appearance of the abdomen and the accumulation of fat around the waist area, as during the night the metabolic activity decreases, and thus the rate of burning fat in the body decreases.

Eating quickly: It is not properly digested, which leads to the accumulation of fat and flatulence.

You may have heard this advice a lot before, but do you know the importance of water and its relationship to burning fat?
Water is the main engine of the metabolism process, it is fast if you drink large amounts of water, and becomes slow if the proportion of water in the body decreases.
In other words, water is primarily responsible for the process of burning fat in the body, so it is recommended to drink 8 glasses of water a day.
Water also helps rid the body of toxins, especially when adding a few drops of lemon to it