Ways to reduce the risk of addiction to “burgers” 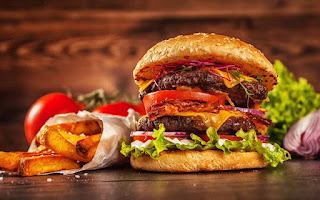 People accept the “burger” a lot, because it is also quick to prepare, and it can be eaten in passing while studying or working, while preparing healthy dishes requires more time or spending more money.

Experts say that the harm of “burgers” lies mainly in the high percentage of their fat, because “double burgers”, for example, that includes two pieces of meat next to mayonnaise, contain 22 grams of saturated fat, or 108 percent of its nutritional value.

As for the cholesterol in this burger, it reaches 172 milligrams, which is supposed to be 57 percent of the recommended value for a person whose daily energy needs reach two thousand calories.

Since quitting “burgers” permanently is difficult, for some, experts recommend minimizing the damage by following some practical steps.

One of the first tips is for the consumer to choose a “burger” of a smaller size, because the number of calories the greater the meal, so instead of two pieces of meat, it is desirable for one to be satisfied with only one piece.

When choosing a “burger bread”, it is best to make it from whole wheat instead of white flour.

And because both chicken and beef have a high level of cholesterol, it is best to prepare “burgers” from plant-based ingredients if possible, such as vegetables.

And since the details are important and influential as well, those who consume the burger should pay attention to the sauces that accompany the “burgers” such as mayonnaise, ketchup and mustard because they add an important percentage of calories that turn into fat when not burned.