The benefits of ginseng for women is very important… Have you tested it? 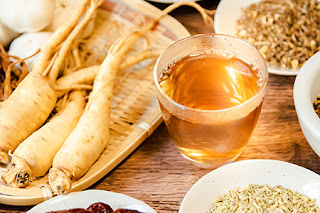 Uses of ginseng in traditional Chinese medicine for centuries to treat many diseases. It has been shown to help reduce signs of inflammation and protect against oxidative stress.

Image for illustration only – iStock-SB

Ginseng is known for its uses to increase sexual ability, concentration and memory enhancement as a potent stimulant in removing chronic stress and strengthening the immune system.

It is a perennial plant that can be used in several ways whether it is fresh, cooked, in the form of syrup, beans, or added to tea.

Dr. in nutrition and nutrition science Cynthia El Haj informs you on the following topic on the benefits of ginseng for women:

The benefits of ginseng are amazing

“Ginseng treats inflammation and maintains cell health, which may help reduce the risk of certain types of cancer by containing many antioxidants,” says Dr. Cynthia El-Haj.

Contains Ginseng to some amazing effects and has proven it elevates the mood, increases energy and gives a positive feeling especially when taken on an empty stomach before breakfast. It has also been shown to benefit mental functions and feelings of calm and mood in healthy people as well as those with Alzheimer’s disease if taken on an empty stomach.

Ginseng strengthens the immune system and enhances the effects of certain vaccines, helps fight fatigue and promotes physical activity by reducing oxidative damage and increasing energy production in cells especially in the early morning. It opens the appetite and thus leads to weight gain naturally for people with poor appetite which leads to excessive thinness. It improves the functioning of the digestive system in addition to strengthening the muscles of the body and thus gaining weight via muscle mass and not fat.”

Ginseng for kidney health and diabetes

“It can be used to help kidney patients recover and deal with their disease, it is good for the kidneys in general, and it also helps to supply the body with the energy and vitality needed in a short time to produce more endorphins that are beneficial to the kidneys. Helps ginseng on relieving pain in the affected areas of the kidney to increase the feeling of relaxation.

Ginseng is useful in controlling blood glucose in people with diabetes or also in healthy people, and has been shown to improve pancreatic cell function and promote insulin production and blood sugar absorption in tissues. Studies show that ginseng extracts provide antioxidant protection to the cells of diabetics”.

“Ginseng helps patients with high blood pressure to naturally lower their levels, and diabetics too, thanks to genosides,”says Dr. Cynthia al-Haj.

The benefits of ginseng for skin and hair

Affirms Dr. Cynthia case that “ginseng works to fight aging and delay the signs of aging; it contains a large amount of phytonutrients that help rejuvenate skin cells to greater intensification of metabolic processes. It also stimulates the skin to increase collagen production, which contributes to increased elasticity of the skin’s outer shell, reducing the appearance of wrinkles.

Ginseng works to get rid of black spots in the skin, experiments have proven this. It can be used for dark circles by mixing ginseng oil with sunflower oil, or mixing it with honey and applying this mixture on the face Weekly and regularly.

Ginseng treats skin diseases, such as eczema and acne, for easy absorption by the skin and skin, as well as activating the blood circulation of the skin.

Ginseng improves the overall shape of the skin thanks to its high content of minerals, vitamins and antioxidants. It also helps to regenerate skin cells and get rid of dead ones, by increasing the oxygen content in the cells.

Prevents ginseng skin freshness, treats dark circles, where scientific studies have shown that it helps to remove the puffiness found around the eye area.

Ginseng oil strengthens hair roots by giving them the important and natural minerals they need. Hair also helps to get rid of dandruff, thanks to the natural antibacterial substance saponins.

Ginseng prevents hair loss due to the weakness of its roots because it contains cellulose, which strengthens the outer layer of the head hair and protects it from daily sunlight. Also proved the ability of ginseng to prevent the appearance of white hair in the head”.

Ginseng tea raises human energy and vitality because of its effective and important properties in the treatment of cases of low blood pressure, also helps to overcome some of the problems that result from the menstrual cycle in women, as it reduces stomach pain that may be associated with menstruation, and contributes to rid the human from some unhealthy eating habits that

Important note: it is forbidden to take and use ginseng for pregnant women as it may cause miscarriage. In addition to avoid its use by patients with ulcers, high blood pressure and avoid taking it with the drugs sedative.