Nasal botox: a cosmetic procedure to improve the appearance of the nose 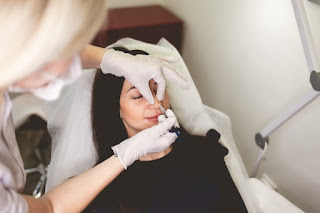 Botox nose: cosmetic procedure to improve the appearance of the nose

Have you ever heard of BOTOX nose? What is this cosmetic procedure? When is it possible to resort to it? The most important information in the article below.

Let’s find out what comes up with some important information regarding Botox nose surgery:

What is Botox nose?

Nose Botox-Non-surgical rhinoplasty is a non-surgical procedure in which the appearance of the nose is altered and improved by injecting certain areas of the nose with Botox.

Unlike rhinoplasty, nose Botox is an inexpensive procedure with few complications, not to mention that it does not require a long recovery period.

Botox is originally a type of neurotoxin produced by a special type of bacteria, C. difficile bacteria, and was used in the past to treat many health problems due to its ability to hit the muscles with a kind of paralysis, and because of this effect doctors began to use it later in the field of aesthetic medicine, so it may help to﻿

In rhinoplasty, It is possible to take advantage of BOTOX by injecting it into one of the three nasal muscles to immobilize these muscles and disrupt the effect on the appearance of the nose for a certain period of time. Nasal Botox results usually last 4-6 months.﻿

When is Botox nose used?

Some may resort to nose Botox to fix various problems in the appearance of the nose, and here are some problems that Botox may help to fix or temporarily alleviate:

1. The problem of rabbit lines

Bunny lines are wrinkles or horizontal lines that may arise on both sides of the nose, a common cosmetic problem and are more likely to appear in the following categories:

People who tend to improve the nose and crimp it as a kind of behavioral habits.﻿

People with chronic inflammation of the nose.﻿

People who have undergone botox injections in the area of the face previously.﻿

Rabbit lines usually arise as a result of repeated contraction of one of the three nasal muscles, called Nasalis, which keeps the nasal cartilage firm and compressed in place.

It is possible to treat these lines by injecting both sides of the nose with a certain dose of BOTOX.﻿

2. The problem of ptosis of the nasal tip

Nasal tip ptosis is one of the common causes that may lead many to resort to nasal Botox.

This aesthetic problem usually arises as the nasal septum muscle pulls the edge of the nose down with increasing force with age, and may also arise from the influence of many other factors, such as: gravity, and frequent movement of the tip of the nose while moving different areas of the facial muscles. ﻿

Nasal Botox may also help treat certain aesthetic and health problems in the nasal area, such as:

Nostrils dilatation: Botox injections on both sides of the nostrils may help reduce the nostrils and prevent them from widening too much. ﻿

The actual nasal Botox session does not last more than 5-10 minutes, but the overall session may take longer due to the need to anesthetize the nose with anesthetic ointment, and wait a certain amount of time afterwards for the nose to numb before starting the session

Like many non-surgical cosmetic procedures may be the patient can return to his normal life immediately after the operation.

Therefore, it is recommended to undergo such cosmetic procedures only at a specialist who can estimate the appropriate dosage to be used.

Botox is not the only substance that can be injected into the nose area to improve its appearance, but it is also possible to use fillers in a cosmetic procedure called Liquid Rhinoplasty.

Cover is the term given to a group of substances that are different from Botox, and examples of the filler material hyaluronic acid.

These are some of the aesthetic and health problems that liquid rhinoplasty may help treat or alleviate:

Some breathing problems: it may help to correct some problems in the nose, which may adversely affect breathing, such as the problem of deflection of the nasal septum.

Cavities, pits or bumps in the nose: liquid rhinoplasty may help make the nose look regular and straight.

Other problems, such as enlarged nostrils, swollen nose tip or what is known as bulbous nose. ﻿

Nasal filler results are usually temporary, as the filler effect May last for about a year or a little more.