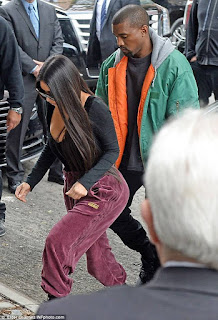 Kim Kardashian, one of the queens of social networks, was at the heart of a surge of messages on Twitter, Facebook and other Instagram, some to support her after her assault in Paris, others criticizing her exhibitionism.

At 35, the American reality TV star has largely built his world fame with countless selfies, sometimes completely naked, and messages on social networks chronicling his every move.

With 48.3 million people following her on Twitter and 84.1 million on Instagram, she is one of the personalities who have mastered the art of self-promotion best online, and her smallest “post” can have colossal commercial benefits.

Daughter of lawyer Robert Kardashian, friend and member of the O.J. Simpson defense team during the “trial of the century”, Kanye West’s wife grew up under the media eye.

The luscious brunette then achieved her celebrity status thanks to the reality show “The incredible Kardashians” which notably features her mother and her sisters, all mistresses in the art of promoting their “jet set lifestyle” “on social networks, not to mention her ex-mother-in-law, former transgender Olympic champion Caitlyn Jenner.

These personalities, usually hyperactive on social networks, kept an unusual silence on the robbery by armed thieves of which the sex symbol was the victim.

Assaulted in the middle of the night in a luxury residence in Paris, Kardashian was tied up and gagged and nine million euros of jewelry was stolen from her.

Her mishap, from which she emerged physically unharmed but psychologically very shaken, sparked a surge of mocking comments on Twitter, criticizing her style deemed too flashy, with some calling the incident a promotional staging.

Many celebrities flew to her rescue, led by hit ‘Carpool Karaoke’ host James Corden: “People who make jokes on @KimKardashian would do well to remember that she is a mother. , a daughter, a wife and a friend. Be nice or shut up. “

Star reporter and presenter Piers Morgan was also quick to say, “I’m so sorry for Kim Kardashian, it must have been a terrifying experience.”

Actress Jamie Lee Curtis and celebrity TV host Perez Hilton said they were dismayed the star was being taunted.

Model and TV presenter Chrissy Teigen was also outraged, “Some things are not funny,” she wrote, adding, bitterly: “Famous people are supposed to love you knowing that you would be making a parody of our corpses to earn retweets “.

She was notably responding to @Uncle_Spooky who said, “Nobody likes armed robberies. But why should you feel sorry for someone with millions of dollars in jewelry alone?”

French journalist Audrey Pulvar quipped: “in fact, she doesn’t have a lot of jewelry … the poor woman is almost naked!” Which earned him an avalanche of criticism.

According to the site celebritynetworth.com, Kim Kardashian earns $ 50 million a year and her fortune is approaching $ 150 million, thanks to her television fees, the promotion of products including a line to lose weight and a line of clothing.

US media such as People and NBC pointed out Monday that the star’s hyper-presence on social media could have helped the thieves prepare their attack, and many called it reckless the publication Thursday of a photo of her with a huge lonely close-up.

According to People magazine, it would be a four million dollar engagement ring.

Twist of fate? Kardashian seemed annoyed at the close presence of one of her bodyguards in Paris and wrote on Instagram a few hours before her attack: “This guy is in my photos all the time!”

For Robert Thompson, professor of popular culture at Syracuse University, one of the few to dominate the art of social networks like Kardashian is none other than … Donald Trump, the Republican presidential candidate.

He is ultra-present like her, has also been the star of a reality show and shows his wealth, he notes.