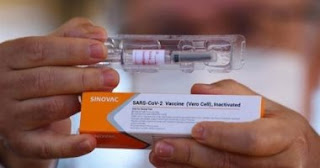 Indonesia plans to vaccinate its young working-age population against the Corona virus before the elderly, unlike many countries of the world that are planning to put the vulnerable elderly in the first place, as health workers on the islands of Java and Bali, which represent more than 60% of confirmed cases, will receive 1.2 million doses of the Chinese Sinovac vaccine arrived on Dec. 6, and frontline workers will follow in the rest of the country.

According to a report by the agency “Bloomberg”, the first country in Southeast Asia to receive coronavirus vaccines will focus on vaccinating those between the ages of 18 and 59 years, starting with those who work on the front lines of the epidemic such as health workers, the police and the army, and this comes contrary to the procedure that The UK did it last week in launching the first vaccination program in the western world with a 91-year-old woman, in line with most other countries.

The United States also began its vaccination program with seniors this week, following the Centers for Disease Control and Prevention’s advice that health care workers and nursing home residents should get vaccinations first, followed by those with pre-existing medical conditions.

As the number of deaths from the epidemic continues to rise, governments are grappling with the question of who should first get the many vaccines that companies are rushing to obtain through approvals while Indonesia’s strategy is currently standing apart, said Amin Soibandreu, director of the Ekman Institute for Molecular Biology in Jakarta: “Our goal is. Herd immunity With the most active population group and those between the ages of 18 and 59 who have been vaccinated, they form a bulwark to protect other groups. It is less effective when we use a limited number of vaccines on the elderly when they are less exposed. ”

Indonesia is targeting the most mobile people because of their jobs, as well as the regions with the largest number of cases of coronavirus infection because it is focusing on using the vaccine as a tool to limit the spread of infection.