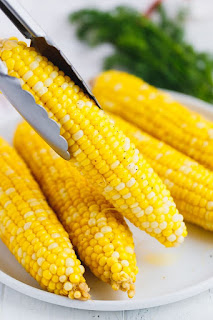 It’s finally winter! Many people eat corn in its various forms in the winter and many times, so what are the benefits of boiled corn?

He loves corn, both adults and children, because of its delicious taste and many benefits, so what are the most important benefits of boiled corn?

Here are the most important benefits of boiled corn:

The cultivation of corn is not difficult, so it is available in many countries of the world. Corn is an overpriced food source for many people in poor countries as it contains carbohydrates, proteins, and calories.

Corn contains many antioxidant elements called carotenoids. Antioxidants work in fighting various diseases and oxidizing factors that cause harm and diseases to the human body.

Corn contains dietary fiber in small quantities when compared to other grains, as half a cup of boiled corn contains 2.1 grams of fiber.

As dietary fiber is very useful, as fiber helps in the digestion process and reduces constipation, and fiber also helps reduce the chances of cardiovascular disease, infectious diseases, and respiratory diseases.

Although corn is considered a grain, it is gluten-free and suitable for people with gluten sensitivity.

Corn is rich in protein more than other vegetables, so corn is one of the foods that are beneficial for vegetarians.

Here are some false and incorrect facts about boiled corn:

Only a small percentage of fresh corn is genetically modified. GM corn is often used in the preparation of sweetened concentrates, cornflakes, or breakfast chips.

Adding butter and high-calorie sauces to corn leads to making corn a high-calorie meal and causes weight gain. A cone of boiled corn contains only 100 calories, which does not increase weight at all, but gives people a feeling of satiety for a long time.

3. Boiled corn is rich in sugars

This belief is not true at all, but a corn cob contains only 6 grams of sugar, which is less than half the amount of sugar in one banana, and beetroot contains more sugar than corn.

4. The cooking and boiling process, the corn loses its nutrients

Corn loses a little bit of vitamin C during the boiling process, but the amount of antioxidants doubles on the contrary.

How to boil corn

The corn husk must be removed first, then both ends of the corn cob can be cut off, but this is optional.

Corn can be boiled by placing the corn in boiling, unsalted water for 3-6 minutes, and then it can be eaten directly or separate the corn kernels from the cob with a sharp knife.

The dangers of corn

Corn is one of the starchy vegetables like potatoes and peas, which means that the carbohydrates inside corn raise the level of sugar in the blood.

Corn is one of the healthy types of vegetables if you do not eat too much. Also, diabetics should not avoid eating corn at all, but it is recommended to eat it in moderation.