Barley tea .. health benefits, side effects and how to prepare 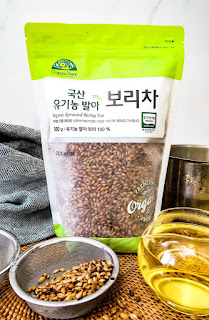 Barley tea is a common herbal drink widely consumed in East Asian regions such as Japan, Korea and Taiwan, tea is prepared by roasting barley seeds and then used in tea preparation, and sprouted and dried barley is used as a barley source for beer production.

Barley tea has multiple health benefits such as weight management, glucose control and improved digestion, and is known for its high fiber content, smoked smell and toasted taste.

A study showed that barley grains, which are used in the preparation of barley tea, contain vital nutrients such as beta-glucan, antioxidants, polyphenols, arabinoxylan, phytosterols, protocol, and resistant starch.

And the best thing about roasted tea is that it can be enjoyed as a warm and cold drink, and also, it can be drunk after adding low-fat milk or honey as a sweetener.

A study has shown that fermented barley grain extract can reduce the effect of inflammatory cytokines and may help treat symptoms of allergic rhinitis such as nasal congestion, headache and runny nose.

And although not many studies have been conducted on the use of barley tea against allergies, noting the positive effect of fermented barley extract, it can be considered an appropriate remedy for the treatment of this condition.

Barley tea acts as an antidiabetic

Can help with fertility problems in men

Barley grains contain a vital mineral and an antioxidant called selenium, which is known to improve sperm motility and quality to improve fertilization, and the low number of selenium in the body is responsible for fertility problems in both men and women along with muscle weakness, hair loss and mental fog.

In the research, barley tea was examined and found that tea improves cognitive functions, maintains the intestinal microbiome and reduces the risk of heart disease and thus increases the age of a person by almost four weeks, and besides, it also delays cognitive decline and spatial recognition due to aging.

Barley tea contains an active protein called a peptide that is associated with strengthening the immune system, other major immunomodulating substances in barley tea include beta-glucan and arabinoxylan, and are known to increase the production of bone marrow cells and white blood cells that help improve immune function.

The phenolic compounds contained in barley tea are responsible for its anti-inflammatory properties, and barley contains polyphenols such as ferulic acids, this helps reduce inflammatory cytokines in the body and reduces inflammation.

Barley tea has the property of protecting the heart, the presence of vitamins (A, C, B1, e), flavonoids (saponarin) and amino acids (tryptophan) in barley tea helps in the Prevention of heart disease, and also, beta-glucan in barley grains is known to lower cholesterol levels that help prevent heart disease.

The presence of beta-glucan, phenols, flavonoids, resistant starch and arabinoxylan, in barley grains is responsible for its anti-cancer effect, and the antioxidant and immunosuppressive effect of tea helps in the Prevention of colon and other cancers.

Side effects of barley tea

– Beta-glucan in barley tea may cause allergic symptoms for people with celiac disease.

– High fiber content in tea may cause constipation or loose stools.

– A compound called acrylamide released from slightly roasted barley can be carcinogenic among a certain group of people, if taken in large quantities.

How to make barley tea:

In a low fire, constantly stir the barley grains in a frying pan or pan until they are brown, do not use any oil.

In boiling water, add barley grains and let boil for 5 minutes over low heat, switch the gas handle and let the mixture soak for 5 minutes, then strain and drink.

You can also cool the, if you prefer a little sweetener, add honey.

How much barley tea should you drink daily?

Should not be eating El feeling more than twice or three times a day, although it contains elements of the dietary powerful and active, it may cause constipation or abnormally loose stools if taken in large quantities.

What are the benefits of barley tea?

U feeling low calories and rich in fiber, antioxidants and vital nutrients that may help in weight loss.